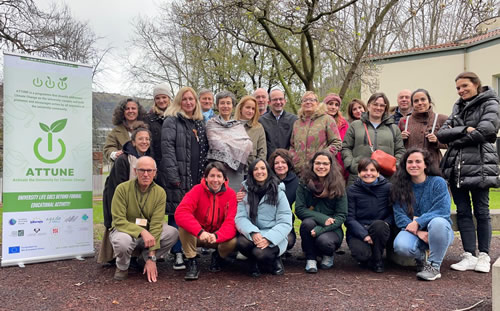 The University of the Basque Country (UPV/EHU) is a partner in the new Erasmus+ project ATTUNE (Activate the University for Climate Change). The project addresses climate change on the university campus and promotes and encourages action by all members of the university community. It encompasses an innovative learning programme that contributes to Higher Education Institutions becoming more sustainable.

The kick-off meeting for ATTUNE was held in Bilbao from 24-25 January 2023 (see photo). The University of the Basque Country is one of the partners in the project, represented by the Directorate of Sustainability and Social Commitment. The project is led by Global Action Plan and involves four other European universities: Hildesheim University (Germany), Özyeğin University (Turkey), The Maria Grzegorzewska University (Poland) and University of Siena (Italy).

During two years (2023-2024), ATTUNE will develop a comprehensive programme that can be used by universities to mitigate climate change. It will be especially useful for the Green Offices to create more sustainable communities and it is based on a multilingual online platform. The platform is developed in six languages and supported by easily understandable manuals. It will involve two parts: 1) Implementation and validation process by testing in the participating universities, and 2) Development of guidelines which will include several manuals.